All the complexity of the operation of a power plant under control. With Spin´s solutions were deployed more than two dozen plants, as well as five plant operation centers. Just in the Sinocon project, Spin took part in the automation of seven plants in the state of São Paulo.

In the years 2013-2015, Spin deployed automation of nine hydropower plants, four for the QGEgroup  and five for the EMAE. Additionally, it implemented two operating centers controlling these plants remotely.

In 2014, Spin participated in the retrofit of four QGE hydroelectric plants, replacing its local SCADA and transferring the operation of all the plants to an integrated operation center. The four hydroelectric were unattended.

In the same year, Spin was contracted to modernize the local SCADA of all the EMAE plants and set up an operation center for them. All these systems are already operational.

In 2016, Spin was contracted by CESP and EMAE to create a mobile information system for the managers and directors of the company, showing plant status, daily and monthly production, etc.

All these systems are operational.

Spin has taken part in automation projects of a series of energy generation companies, among which are: CESP, EMAE, DUKE, AES Tiete, Gerasul and QGE. In CESP, we implemented the System Supervision and Control of Production (SSCP). This system is installed in Hydroelectric Jupiá, supervising the six plants of CESP’s generation facilities:

Spin has completed the retrofit of all EMAE plants as well as four QGER plants.

To be responsible for the development of an industry standard SCADA software is to have control over the various aspects of a deployment. Beyond the power to adapt to a series of different situations and needs, the process of adaptation and improvement is in itself very valuable.

Through careful monitoring, Spin is able to identify sources of problems with a strategic comprehensive view. Thus, the company software is always in development, bringing together more than 25 years of experience in automation of electrical systems.

All features added to a project are incorporated into the product making it the best in all aspects (quality, robustness, functionality, etc.).

Working with large companies in the power generation market is like having a seal of quality. Among the deployments made by Spin, the operation centers are highlighted by the level of complexity and the successful projects.

In the history of Operation Centers developed by Spin, there are companies like CESP, CTGBR, EMAE, QGE and ENERFIN. 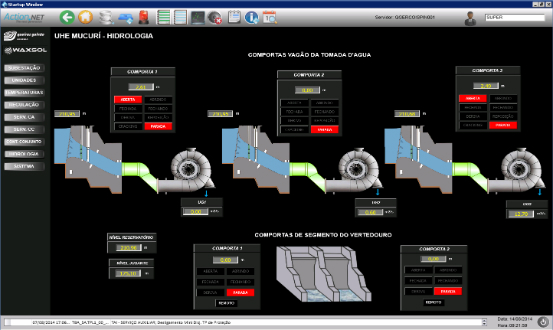