As an integrator of automation systems, Spin has already participated in the implementation of several wind farms using wind turbines from different manufacturers. A wind farm is composed of several parks, each with several circuits that receive energy from the wind turbines, delivering it in a transmission substation. In addition to supervising substation control of the transmitter Substation Park and bay, data is acquired from wind turbines and weather stations.

With experience gained in the automation of various wind farms, Spin has developed a component to generate wind farms, as seen in the video. In this example wind generators used from two manufacturers are used, but others could easily be added.
In addition to the speed of generating the application and its quality, using the component, an inexperienced technician will generate an application as required by regulatory agencies.

Working with a company that has automated several wind complexes reduces costs and ensures the success of the enterprise. The company experience is reflected in oriented Object Library application, in knowing what to do and the time it takes to do it, how many and which points of I/O are substantive, and what protocols must be used, which are the templates of wind turbines, the meteorological stations, etc.

To rely on experience and efficiency is to ensure results.

Spin was responsible for the implementation of several wind energy complexes and hidroelectric power plants for the company QGE and implemented the control center of these complexes. All complexes are unattended and there is only operators in the control center. The architecture of the solution is shown below. 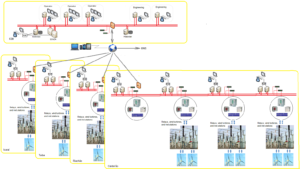 In 2007, Spin took part in the implementation of Wind Parks of Osorio Operation Center, from Enerfin, using Wobben wind turbines and relays ABB/Schweitzer, with the DNP 3.0, Modbus and OPC protocols.

After deployment, the parks’ expansion were made and, through a bidding process, other companies with other supervisory software were contracted to take part in the automation of new parks.

In 2013 and 2014, Spin was contracted directly to make changes and extensions in the system. With these new services, the customer mentioned that the software and services provided by Spin were better than the competition, and were the reason behind the establishment of a direct contract with Spin.