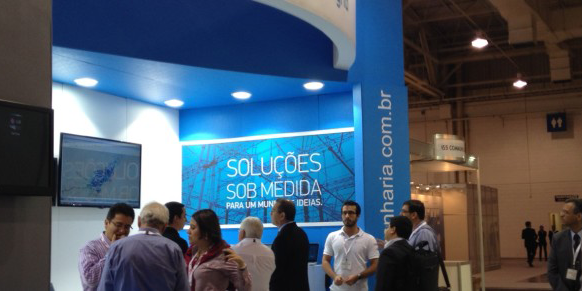 The DistribuTECH Brazil 2014 event aimed to electrical distribution market, took place at the Transamerica Expo Center in Sao Paulo. Spin participated in the event with a stand and presented to various stakeholders the latest offering to the market: Action₀GRID and Action₀NET.

Action₀NET is the upgraded and improved version of SCADA software that made the Spin known in the market. The presentation surprised visitors with beautiful graphics, speed and convenience for building screens (which can be made by the users), 3D simulation of a power distribution substation, as well as functionality via tablet and smartphone.

However, the highlight of Spin was Action₀GRID, modular solution for electricity network management. Five modules – OMS, EMS, GIS, SCADA and MOB – work together to carry out the control of power distribution systems. The operating speed impressed sector companies, accustomed to working with heavy and slow geographic information systems. The facilities offered by the synchrony between modules and the operation for tablets and smartphones also drew attention.

Amid the conferences, lectures were given. Among them, one of the current customers of Spin, Queiroz Galvao presented a targeted project for wind power plants in which it is implemented Action₀NET and the attendants could have a better idea of ​​the possibilities offered by the tool.

Spin Engineering appreciates the participation of all who were able to visit the company’s stand and hope to evolve in various conversations and business initiated during the event.